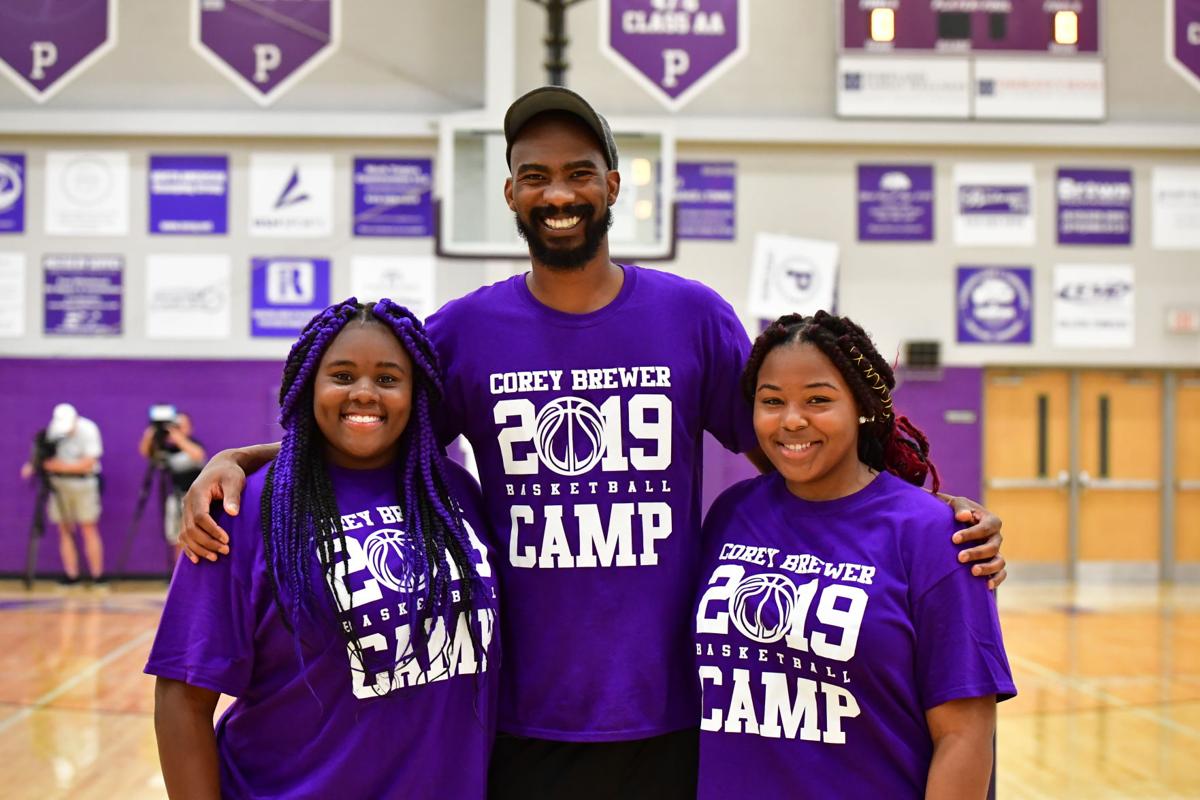 Corey Wayne Brewer (born March 5, 1986) is an American professional basketball player for the Sacramento Kings of the National Basketball Association (NBA). He played college basketball for the Florida Gators, winning back-to-back NCAA national championships in 2006 and 2007.[1] He was named Most Outstanding Player of the 2007 NCAA tournament.

Brewer was born in Portland, Tennessee. He attended Portland High School, where he played high school basketball for the Portland Panthers. As a senior in the 2003–04 season, Brewer averaged 29.4 points and 12.8 rebounds per game and was named the Tennessee Secondary School Athletic Association (TSSAA) Class 2A “Mr.Basketball”, McDonald’s All American, and a fourth-team Parade All-American.

Considered a four-star recruit by Rivals.com, Brewer was listed as the No. 7 small forward and the No. 31 player in the nation in 2004.

Brewer accepted an athletic scholarship to attend the University of Florida, where he played for coach Billy Donovan’s Florida Gators men’s basketball team from 2004 to 2007. Brewer was one of four key freshman members of Donovan’s 2004 recruiting class who would have a dramatic impact on the Gators’ fortunes over the next three seasons. Propelled by the 2004 class, the Gators would win the first three SEC basketball tournament championships in team history (2005, 2006, 2007), and two back-to-back NCAA Tournament national championships (2006, 2007) with the same starting line-up.

Brewer recorded the first triple-double in Gators team history on December 18, 2005, posting 15 points, 10 rebounds and 13 assists (the 13 assists were the most by a Gator since Jason Williams had a team record 17 in 1997).

He was projected by ESPN.com’s Chad Ford to be a lottery pick to mid-first round pick in the 2006 NBA draft if he had entered the draft that year. However, Brewer, along with teammates Joakim Noah and Al Horford announced at the championship pep rally that they would be returning for their junior seasons in pursuit of their second NCAA Tournament championship. Following the Gators’ second NCAA championship, Brewer chose to enter the NBA draft on April 5, 2007 along with teammates Noah and Horford.

Brewer was selected seventh overall by the Minnesota Timberwolves in the 2007 NBA draft. Due to the retirement of the No. 2 jersey in Minnesota worn by the deceased Malik Sealy, Brewer expressed the desire to wear No. 22 instead. He officially adopted the No. 22 for the season’s summer leagues, in Las Vegas, Nevada.

On February 22, 2011, Brewer was traded to the New York Knicks in a three-way blockbuster trade that also brought Carmelo Anthony from the Nuggets to New York. On March 1, 2011, he was waived by the Knicks without playing a game for them.

On March 3, 2011, Brewer signed a three-year, $8 million contract with the Dallas Mavericks. He went on to win his first NBA Championship with the Mavericks when they defeated the Miami Heat in six games in the 2011 NBA Finals.

On December 13, 2011, Brewer and Rudy Fernández were traded to the Denver Nuggets for a future second-round pick.

On July 12, 2013, Brewer signed a reported three-year, $15 million contract with the Minnesota Timberwolves, returning to the franchise for a second stint.

On April 11, 2014, Brewer scored a career-high 51 points in a 112–110 win over the Houston Rockets. In doing so he joined Michael Jordan, Allen Iverson and Rick Barry as the only players to record 50-plus points and 6-plus steals in one game. He also tied Kevin Love’s then-franchise record for most points in a game.

On December 19, 2014, Brewer was acquired by the Houston Rockets in a three-team trade that also involved the Timberwolves and the Philadelphia 76ers. Three days later, he made his debut for the Rockets against the Portland Trail Blazers. In just under 23 minutes of action off the bench, he recorded 12 points, 4 rebounds, 4 assists, 5 steals and 1 block in a 110–95 win. On February 21, 2015, he recorded season-highs of 26 points and 10 rebounds in a 98–76 win over the Toronto Raptors.

On February 23, 2017, Brewer was traded, along with a 2017 first round draft pick, to the Los Angeles Lakers in exchange for Lou Williams. On February 28, 2018, he was waived by the Lakers after reaching a buyout agreement.