Coming off two straight losses, the White House Lady Blue Devils looked to rebound in their opening district game of the season against Portland.

Despite giving up an early goal, White House overcame the deficit to come out on top 2-1 over Portland.

“Coming into district play it was big to get this win against Portland,” White House coach Mike Felzein said. “That’s what we wanted to do, to start off our district schedule with some momentum.”
The Lady Panthers jumped out to a one score lead less than four minutes into the contest after a corner kick led to a goal from Ella Clifton.

Portland held onto the lead until the 27th minute in the first half when White House evened the score with a goal from Baylee Miller.

White House then took the lead with just a minute remaining after Miller’s second goal of the game, this time with an assist from Hannah Potts.

“It was great to see us respond positively to being down,” Felzein said “We’ve discussed that often goals are scored in twos or threes, and you’ve got to really toughen up when a goal is scored. You can get scored on or you can score another one. So it was nice to see us respond well to that, especially for us being so young.”

The Lady Panthers had several opportunities to tie the game again in the second half with good looks at a goal but each shot sailed past the net.
“Both teams are really young, so there’s a lot of inexperience in terms of varsity play,” Portland coach Ryan Goostree said. “They got the upper hand on us tonight, but as a team we just need to persevere and move this as we continue to progress moving forward. There’s a good chance we could see them again in the district tournament to get another shot.”

With the win, White House improves to 2-3 overall and 1-0 in district play. Their season continues next Monday as they host Merrol Hyde at home. Portland falls to 1-3 and will look to regroup as they travel to face Greenbrier Friday. 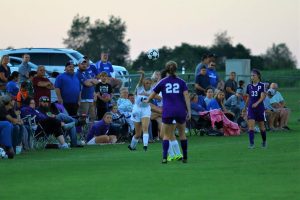