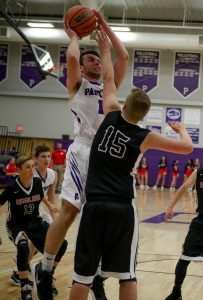 The Purple led 37-36 with a minute remaining in the third, but the Indians put together their 11-0 streak that extended into the fourth quarter to go up by 10. Portland did cut the lead to five, but the Indians put the game away with 10 unanswered points to get revenge for an earlier loss in November.

“We have to be more consistent,” said Panther coach Darryl Travis about the loss. “We continue to give teams more shots. We had three offensive rebounds tonight and we had some defensive breakdowns. East Robertson has two good players and their number 15 wore us out from the corner during their scoring streak.”
Austin Hicks topped the Panthers with 20 points while Mitchell Eagle fired in nine. Duncan Smallwood netted eight, Hunter Hicks and Dairius Bell each had five and DeQuan Bradley and Gaven Parrish rounded out the scoring with two apiece.

East Robertson took a 2-0 lead to start the contest before Hicks and Eagle each drained a 3-pointer, and Smallwood recorded a basket for a 8-3 edge. The Indians came back to take the lead at 9-8 behind a 7-0 run.

The game remained tight as Hunter Hicks connected inside before Taylor Groves, who led all scorers with 21, cashed in on an offensive rebound. Austin Hicks knocked in a 3-pointer and after a 3 from Isaiah Hobdy, Parrish made a nice move to the basket to give the Purple a 15-14 margin at the end of the opening eight minutes of action.

The second period was just as tight as Austin Hicks fired in a jumper, but hit a 3-pointer to tie the score at 17-17. Smallwood collected two points in the paint before #10 connected to retie the game.

Bradley snapped the deadlock and Smallwood dropped in two free throws for a 23-19 lead. The Indians closed out the first half with four straight points to knot the game up at 23-all.

Portland opened the third with baskets from Bell and Eagle before back-to-back 3-pointers by Jace Hunt created a 29-27 Indian advantage.

Eagle knotted up the game on a bucket and Austin Hicks canned another 3-pointer to give Portland a 32-29 edge.

East Robertson battled back to regain the lead. But Hunter Hicks scored three straight to five the Panthers their final lead of the evening at 37-36.

The Indians were sparked in their 11-0 run by Darion Shannon with five and Hobdy added four and Groves dropped in a basket for a 47-37 margin with 6:30 left to play.

Bell and Smallwood each scored, Eagle hit a short jumper and Bell made a foul shot to cut the lead by five, 49-44.

Ten straight points by the Indians produced a 59-44 cushion. The Purple, however, did take advantage of double technicals as Austin Hicks collected six straight free throws to trim the deficit to one 59-50 late.

Portland would get no closer in the final minute of action.

The Indians placed three players in double figures and were led by Groves with 21, Hobdy chipped in with 14 and Shannon tallied 11.

Portland travels to Hendersonville Friday night and hosts Greenbrier on Saturday. Next Tuesday, the Panthers make the trek to Beech.