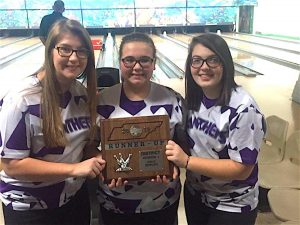 After defeating Merrol Hyde in the first round, the Lady Panthers eked out a 14-13 semifinal win over No. 2 seed Mt. Juliet but fell to undefeated Lebanon 22-5 in the title match.

The Purple will play in the regionals after Christmas in Dickson County.

advertisement
The Portland girls won 22-5 over Merrol Hyde in the first round of the District 12 tournament on Dec. 4.

The Lady Panthers held a 714-503 edge in game one total pinfall and points.

In the final set, High was successful 123-99, Miranda Rigsby knocked off her opponent 102-79 and Hailey Langley won by forfeit.

In matches leading up the district tournament, the Portland girls defeated Merrol Hyde 21-6 on Nov. 20. In the first set, Lia Hicks collected a 94-86 win, Leah High won by forfeit and Lauren Holloway defeated her opponent 149-128. High picked her second victory by forfeit in the second game while Holloway earned a 135-131 decision and Maddie Taylor was successful 163-94.

Portland won over Hendersonville 16-11 on Nov. 27. High and Holloway both swept their opponents in all three games with Summer Evans picking up a win in game one and Kirstie Speakman recording a victory.

Lia Hicks edged her opponent by seven pins in the second set.