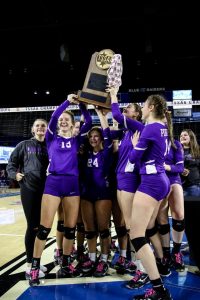 MURFREESBORO – Talk about déjà vu. The Portland Lady Panthers drew Knoxville Catholic in the Class AA state volleyball championship. No, this isn’t 2017, as the two schools rematched in the state championship again this year.

The Lady Panthers got right down to business and didn’t let up finishing the first set with a dominating 25-12 win.

“We talked after the first set that it’s not going to be that easy the rest of the way and if they come out fighting not to panic because you expect that,” Portland coach Rob Lesemann said. “They got ahead of us in the second set, but we were able to come back and take that set, and I think mentally, that kind of wore them (Knoxville Catholic) out a little bit.”

Knoxville Catholic seemed to be a bit stunned during the first match, but played closer in the second set, still losing 25-20. Knoxville Catholic couldn’t completely recover though and “Team 30” put the final nail in the coffin, finishing the third set 25-17 and winning the state championship for the second consecutive year, the first time any Portland team has won consecutive state titles in any sport.

“We took off in the third set,” Lesemann said “Marlayna had the best match I’ve ever seen her play. Our defense was just wonderful today. We’re known for defense and that’s what we’ve done for years. My girls can play. I just sit back and watch sometimes and I’m amazed by them.”

Bullington led all players in kills and digs with 30 and 23, respectively. Savanah Pippin followed with 11 kills, while Emily Rogers had 19 digs and Katie Crutchfield had 17.

After winning the 2017 Class AA championship, Portland knew there was a lot at stake on Thursday.
“It was a lot of pressure; pressure that we put on ourselves, pressure from the injuries we had,” Lesemann said. “They wanted to prove that last year wasn’t a fluke and that we have earned to be at the top. I think just getting here is a big deal. Team 29 and Team 30 did it. Next year, they’ll want to prove that Team 31 can do it. They’re hard nosed competitive athletes and they just want to win.”

The Portland community was well represented at the state tournament. Vocal Panther fans came in masses in what looked to be the biggest crowd for any team there.

“I think it’s wonderful the way the people come out and support us and there are probably twice as many on Facebook watching,” Lesemann said. “It’s just unbelievable the way people support our program.”

The Lady Panthers have two seniors graduating this year — Marlayna Bullington and Presley Cowan. Both are closing a chapter on the most successful sports team in school history.

“I didn’t have any doubt, I had confidence in us,” tournament MVP Bullington said. “I knew we could do it together as a team. We’d played them before and knew what it was like. We were motivated to win. We wanted to do it for our community and for each other, and our coaches. It was a great last game.”

Added Cowan: “I knew we were going to come out and play the best game we could play and whatever the end result was is what it should be. I didn’t want to have any regrets. If we had lost, I knew we played as hard as we could. I think winning the first point or the first set is very important. I feel like winning that first set made a very big statement.”

Both seniors stated they will look back on their final two years and remember not only the state championships, but the life-long friends and memories they made along the way.

“We’re very close as a team and we couldn’t have done it without each other, all 21 of us,” Bullington said.