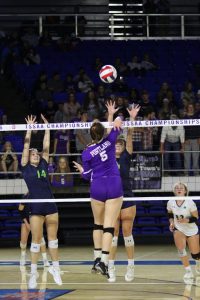 MURFREESBORO — It was a nail-biter, but the Portland Lady Panthers defeated Knoxville Catholic 3-2 to move to the state championship game tomorrow at the Murphy Center in Murfreesboro at 1:30 p.m.

Portland won the Class AA state championship last year, beating the same Knoxville Catholic team, and depending on the outcome of Knoxville’s next match today, the Panthers could face them in the championship match again this year.

Knoxville Catholic won the first set 25-16. However, Portland rallied to win the second and third sets 25-17 and 25-19. Knoxville Catholic got back in the game, winning the fourth set 25-21, forcing a fifth set, where Portland finished it off 15-13 to book a return trip to the state championship.
“We’ve played teams that good all year and beat them in tournaments,” PHS coach Rob Lesemann said. “I knew we could do it. A lot of people here haven’t seen it. We haven’t played that well this week. But that’s the team I’ve been seeing all year and I’m glad that people here got to see that. Hopefully, they’ll see it one more time.

“That match took a whole lot out of them,” Lesemann added. “The thought to get that close and not win it and have to play again today would be very hard to come back from.”

“Team 30” as Portland goes by, is looking to win back-to-back state volleyball championships after winning the first one in school history last year.

“There’s nothing I can say,” Lesemann said. “I’m just proud of them, like a proud father. I’ve had coaches tell me my girls are really good and they’re humble, too and that means a lot. That’s what you want to hear.”