Portland survives opening Hillwood scores
Hillwood quarterback Hale Page went to the air early and often, scoring touchdowns on the Hilltoppers opening two drives. Portland regrouped, played keep way from Page and Hillwood’s potent offense and cut the lead to 14-12 at the half.

There’s nothing fancy about Portland’s offense. The Panthers control the ball and the clock with the inside running game consisting of quarterback Caleb Mandrell and fullback Josh Dutcher, with an occasional reverse to keep the defense on its toes.

“It’s hard to keep in rhythm with they hold the ball for eight minutes every drive,” Page said.

Like father, Like son
Hillwood coach, Kurt Page, a former Vanderbilt quarterback, was one of the Commodores best at the position. Hale Page, doesn’t have great size (5-foot-10, 170 pounds), but the senior signal caller is extremely athletic, has a strong arm, athletic and throws well. The younger Page has thrown for nearly 600 yards in two weeks.

Several drops during the night on important downs, plagued the Hilltoppers throughout the night.

Kicking game non-existent
Both Portland and Hillwood were searching for kickers. Both teams regularly went for the two-point conversion after touchdowns. Portland decided to kick an extra point after a touchdown in the second half, but that one was missed wide right. Hillwood never kicked an extra point.

Portland finally converted an extra point late in the game.
Portland (2-0) opens Region 5-4A play on Friday at Montgomery Central. The Panthers have not started the season 3-0 since 2005 when they went 7-4.

Hillwood (0-2) opens Region 6-5A play next week at Hunters Lane. 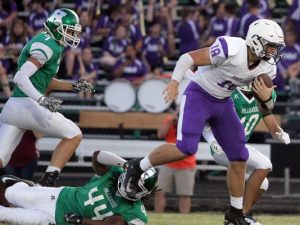