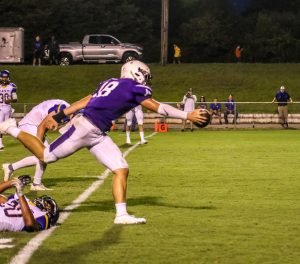 The Portland Panthers kicked off the 2018 season with a win, beating the Warren East Raiders 28-14 at home on Friday night.

Portland hit the ground running, scoring a touchdown on the opening drive of the game, capped off with a 1-yard touchdown on Caleb Mandrell’s quarterback sneak for the 7-0 lead.

Not wasting much time, Josh Dutcher contributed six more points with a 1-yard touchdown run as well, but this time the extra point was missed and Portland held a 13-0 lead.

With just over five minutes left in the first half, Caden Box scored a 39-yard touchdown and Josh Dutcher ran in the 2-point conversion, extending the Portland lead to 21-0.

With the Panthers defense holding, the Raiders decided to go for it on the fourth down, but it wasn’t meant to be as Bryson Dowlen intercepted Warren East quarterback and ended up at the Raiders 38-yard line with 2:57 left in the first half.

The Panthers continued the drive with Caleb Mandrell scoring a 13-yard touchdown and Portland claiming a commanding 28-0 lead.

Warren East came back fired up after the half, scoring a touchdown with a 28-yard pass to Stockton, pulling to within 28-7.

The Raiders scored their second and final touchdown with 1:22 left in the game on a completed pass to Maxey from 22 yards out, but it ultimately was not enough.

“I thought when we got off the bus from camp and played East Robertson, we came in with an attitude and got out there pretty good, and I think you saw that again tonight,” Portland coach Greg Cavanah said.

The Panthers go on the road, traveling to Hillwood for a Thursday night game.