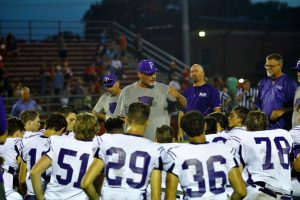 The Portland Panthers scored first in the second quarter against Westmoreland when Dylan Gulley scored a 20-yard touchdown and Kannon Conrad kicked the extra point giving the Panthers a 7-0 lead.

“I thought we were physical up front,” Portland coach Greg Cavanah said. “Fullback Josh Dutcher did a good job reading his keys as did Devyn Fuqua. Defensively, we’ve got a couple that we need to get back. A couple of kids have been injured for a while.
“We’ll watch film and reevaluate, and go from there. Film is going to be crucial on this week because the calendar starts a week from tonight.”

The Panthers open their regular season on Friday when they host Warren Central.